I Need A Pause 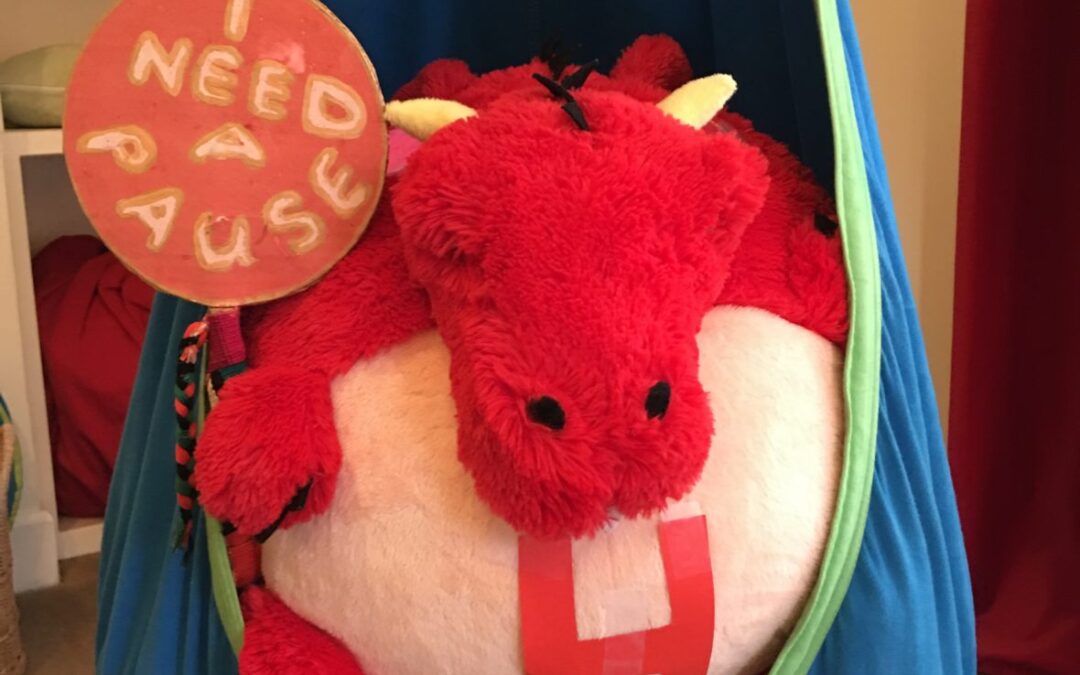 The photograph above was taken in my office after a Prenatal & Birth Play session with three-year-old Lily and her parents. The blue and green hanging pouch/seat in the picture represents the womb and the cuddly toy, chosen and placed into the pouch by Lily, represents her prenatal unborn self. In a safe play environment children can choose objects and toys to:

I made the ‘Pause paddle’ – sticking out of the side of the pouch with ‘I need a Pause’ painted on it – at the request of one of my clients several years ago. When a new family comes in with their child I point out the Pause paddle to everyone and say, “You can pick that up anytime if you need a break, a rest, or a Pause and we’ll all stop and rest.” I explain the Pause in more detail to adults in their first session and to parents outside of the child-centered play session so the they can use it at home and practice it in the play sessions. The Pause gives you time to check in with yourself, slow down, or stop with no limit to the length of the Pause taken. It’s a great resource for regulating and settling your nervous system and dealing with triggers in the moment so that you, or your child, can return to a neutral calm state. You can also get support in the Pause.

I have a larger pouch/seat suitable for older children to share their womb and birth stories. Children will go inside the pouch, sometimes put toys in there as Lily did in her session, or take toys in with them that can represent new resources in the womb that they didn’t have access to back then. Adults often want to climb inside too!

As you can see in the photograph Lily’s chosen a cuddly toy that takes up the whole space inside the pouch. This indicates that she is sharing something with us from later in her gestation when she was big enough to fill up the whole womb. A very small toy placed in the pouch could be an early first trimester story being told because the child is showing us a small being in a large space. Children often like to have a blanket covering the pouch opening so that they can feel more enclosed. They also climb up it, swing on and in it and have someone spin them around until they’re dizzy. These are some of the many ways in which children share their experiences with us and let us know what needs support in their system.

Lily had a very stressful time in the womb in the period just before her birth due to mom having some stressful medical issues and interventions towards the end of her pregnancy. If a pregnant mom is stressed it can be stressful for her unborn baby too.

When children can slow down or take a pause they can integrate experiences from their journey into life that may have been happening too fast for their nervous system. Stress and trauma can unwind within a slower paced session that allows them time to feel and be seen, heard, and supported at their own pace. It’s very healing and they can feel more embodied, present, calm and empowered.

Children who are moving fast, and sometimes even tripping over their feet and banging into objects, may have had early experiences that were overwhelming and that caused them to leave their body to cope. In every session with seven-year-old Nate, who was born premature and was in the Neonatal Intensive Care Unit (NICU) for four months, I continually supported him to slow down so that he could land in his body. Nate was adopted and his biological mom was a crack addict which was another factor that had contributed to his revved nervous system. He was a different boy when he was grounded – much calmer, slower, no longer banging into everything in a frenzy of activity and he was also more affectionate and able to rest.

Slowing down the play and giving permission for rest is very healing alongside acknowledging the original stressful event that caused the child’s nervous system to be sped up. E.g. you can say “That was really fast back then when ??? was happening and now we can slow down/rest/take our time here”. Slowing down and Pausing gives us the opportunity to feel into our body and emotions and land in ourselves more fully.

The Pause is the opposite of a Time Out, which often involves separation between the parent and child. A Pause happens in connection with another and is supported and presenced by adults. E.g. If you called a Pause I would pause with you and quietly hold space for your pause until you were done pausing and then we would continue. There is no limit to the length of a Pause and you can also ask for support in your Pause.

The Pause is one of Ray Castellino’s principles (CastellinoTraining.com). It’s not possible to use the Pause without another of Ray’s principles – Mutual Support & Cooperation. If I call a Pause and you are not in mutual support and cooperation with me about Pausing it simply can’t happen because we have to be in agreement for it to work.

After four weeks of Lily showing us (me and her parents) her prenatal story with her chosen cuddly toy and her use of various baby’s in the play space Lily set this scenario up in the pouch and she looked very pleased with it! Her parents were also delighted. We all paused and enjoyed a pause with her – one which she had been unable to take during the stressful period before her birth. Her parents also got the benefit of Pausing in the pre-birth place that they had been unable to rest into at the time.

In a couple of her sessions Lily gave her dad the Pause paddle and we acknowledged that dad might need a Pause! Pauses are not normally taken on behalf of another but with a young child I like to give some space to how perceptive little one’s can be about us adults! We can at least consider if Lily was intuitively right about dad needing a pause, and dad might be curious about whether or not he needs to pause more too.

Children really take quickly to the Pause. They may not actually pick up the Pause paddle or say I need a Pause but it does given them explicit permission to rest anytime they want to and they often do rest when it would not be normal behaviour for them to do so. Children of all ages will often begin to take short rest periods that are completely out of character, E.g. resting on a parent, lying on the mat with a blanket, etc. Some kids have such buzzed nervous systems from medical interventions (e.g. Pitocin, inductions, sped up medical procedures during birth, etc), or stresses held in their systems that they have been unable to unwind, and that have prevented them from resting very much at all. It can be a challenge to get them to wind down and therefore to sleep. Adults around them role-modelling Pauses can really help. Giving our children permission to rest and staying calm inside of ourselves has great benefits for our young one’s and it usually rubs of on the parents too so that’s good for everyone!

Do you need a Pause?

Contact me for a free 20-minute initial Zoom consult